Disney Plus will be delivering us a live-action limited series focused on Hawkeye/Clint Barton which will see Jeremy Renner reprising the role. With published day is really close, let’s walk through all things to know about Hawkeye TV Series 2021!

Hawkeye is an upcoming American web television series, based on the Marvel Comics superhero of the same name. The series is a sequel to Avengers: Endgame and a crossover/sequel to Black Widow. It is the seventeenth television series in the Marvel Cinematic Universe, and the eighth installment of Phase Four. Here are full details about Hawkeye TV Series 2021 we have gotten from Marvel so far.

The first trailer for Marvel’s Hawkeye dropped in September 2021, giving fans their first look at Hailee Steinfeld’s Kate Bishop, and the return of Jeremy Renner’s Clint Barton after more than two years away. 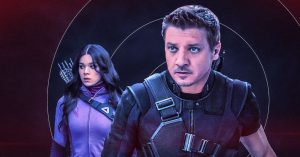 Hawkeye will premiere its first two episodes in a double-bill on Wednesday, November 24, 2021.

The series will then release a new episode weekly in the run-up to Christmas.

This is the first Marvel Studios series to begin with a double-bill since WandaVision, with later releases The Falcon and the Winter Soldier, Loki and What If…? all sticking to just one episode per week.

The release date was first announced over the summer along with the first official image from the Disney Plus series, showing Clint Barton and Kate Bishop in a training room decorated with Christmas lights.

Filming commenced in December 2020 in New York City and wrapped approximately four months later in April of this year, with Renner saying he “can’t wait” for fans to see what’s in store. 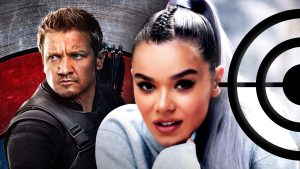 Liana Ramirez as a to-be-confirmed character

Simon Callow as a to-be-confirmed character

Who is the villain in Hawkeye?

The series is reportedly based heavily on the “Hawkeye Volume 4 comic series (2012-2015)” written by Matt Fraction. The comic series heavily featured a mafia group called “Tracksuit Mafia (or Tracksuit Draculas)”, led by Ivan Banionis. The Tracksuit Mafia is showcased in the trailer in multiple shots and even features Ivan briefly.

During the car chase scene shown in the trailer, a van for the mafia’s “front” business, “Trust a Bro, moving company,” also establishes Tracksuit Mafia’s connection.

In the comics, the group was known to use “bro” in their catchphrase frequently.

The trailer also briefly showcases Hawkeye’s 1970 Dodge Challenger, which in the comics he brought from Ivan’s wife, Cherry. The woman, known as Darlene Wright, used the alias “Cherry” to sell the car to Clint Barton to enlist his help to escape from her husband, Ivan.

This makes it plausible that the main villain of the show will be The Tracksuit Mafia. It is possible that during Clint’s stint as Ronin during the five years after Thanos’ snap, he had some conflict with the mafia. The other theory is that some other individual or group hired the Tracksuit Mafia to hunt “Ronin” down. This is likely as Kate Bishop moonlighting as the vigilante brought the persona back onto the radar. 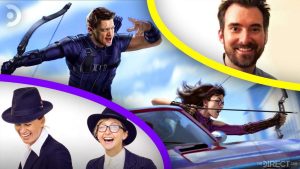 In July 2020, Troop Zero filmmakers Amber Finlayson and Katie Ellwood (known professionally as Bert and Bertie) signed on for directorial duties on a batch of episodes, according to The Hollywood Reporter.

Also pulling the strings for part of the series will be Welsh director Rhys Thomas, whose previous credits include Comrade Detective, Documentary Now and John Mulaney & the Sack Lunch Bunch.

It is unclear which other directors will be involved in the series, but based on the first names to be unveiled it appears as if the studio are opting for filmmakers with comedic backgrounds – which could tell us something about the tone of the series.

Where to watch Hawkeye TV series 2021? TeaTV has established itself as perhaps the best and most popular platform to watch Marvel movies and shows. It is estimated that the service has more than 100 million registered users globally.

On its website, TeaTV claims to be the world’s largest collection of all Marvel contents. Its catalog is certainly massive. It offers the latest Marvel movies and shows that barely hit the theater or on-air on Disney+. In addition, every content on TeaTV is totally FREE!

That’s all for full details of Hawkeye tv series 2021. Do you want more details of any movie or show? Don’t hesitate to tell us in the comment section below!