Recently, the most awaited Korean zombie series, All of Us Are Dead trailer is officially launched.

All of Us Are Dead trailer

All of Us Are Dead shows us a chaotic scene occurring at a high school, where a mysterious zombie virus originates and begins to spread. Finding themselves completely trapped in this mess, students are trying to find help when no one believes the zombie outbreak is real. There is no sign of rescue, no internet connection, and no phone signal either. In the end, the students realized that they are the only ones who can save themselves.

Having lost friends, teachers, and normal life in one day, will these kids be able to defeat the bloodthirsty zombies to escape the school safely? Let’s find these answers when the series is on air.

To have the best preparation, here are all the things you need to grasp before dive into this new series.

What is All of Us Are Dead about?

The series is based on “Now at Our School,” a popular webtoon by Joo Dong-Geun. The digital comic is made up of 130 episodes, which were originally published between 2009 and 2011.

As “All of Us Are Dead” trailer and synopsis on Netflix revealed, the series will follow a group of students who face life-threatening in a zombie invasion of their high school.

What is the release date?

All of Us Are Dead will premiere worldwide on January 28, 2022. You can watch this series free on TeaTV

All of Us Are Dead actors 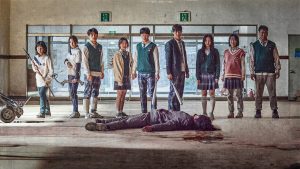 Among those Yoon Chan-young is the most standout name. He is well known for his role in MBC hit series ‘When a Man Falls in Love’. He is also called the child prodigy for his talent.

All of Us Are Dead overview

Instead of focusing on heroes or powerful humans, All of Us Are Dead with its zombies topic approaches a different type of character, students, those who lack life and survival skills. However, the series proves that even the weak can make big things when they are forced to break their limit to survival.

All of Us Are Dead with all potentials it brings is hoped to make big things like Squid Game did last year.